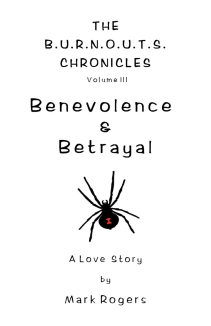 Martians, nymphomaniacs, drug dealers, federal agents, and ghosts all partake in their share of heartbreak, suicide, murder, rape, cocaine abuse, car crashes, and incontinence in this third installment of The Chronicles, as pandemonium and infidelity run rampant in this era’s final installment of the B.U.R.N.O.U.T.S. Chronicles™; an era which drives some to psychiatric furlough’s, some to newly invested lives of crime, and some to the Missing Persons database.

It is an era that Mahdakis finds his creativity drowning in an overwhelming wave of F.A.G.G. Metal music; music he feels threatens his chances of any musical future, as male musicians dressing like women, are now the only ones being signed to recording contracts because genuine women are inexplicably drawn to them and their hokey love songs.

But perhaps this is merely an excuse he uses to rationalize his apathetic behavior towards growing up and becoming a responsible Human Being; denial shrouding any chance of clear thinking, as the only real drowning being done is that by his own hand; drowning in a self-created sea of scotch, anger, and LSD, accentuated by the formidable, yet intoxicating, sexuality of Jezebel Crowley, as their love soars to a volatile peak in a no holds barred wrestling match of the hearts.

But so caught up in the intensity of his passionate frenzy, he injudiciously underestimates his opponent’s will and desire for independence…and victory. For Jezebel too, finds herself trapped in the same furious liaison of orgasmic euphoria from which she secretly desires no escape.….but unlike him, begins to understand the dire consequences if she does not.

Desperate to remember himself, he returns to The Mountains for answers.