Two weeks into the rehearsals, Nigel made an announcement following the ending of a song, “Dudes.” He made sure to have everyone’s attention. “Guess what?  I got us a real cool second guitar player. His name’s Mike; I met him at Avenues over the weekend.” Avenues was a popular nightclub in Philadelphia where all the best F.A.G.G. Metal bands played. If you were playing Avenues, then you had arrived. More importantly, Avenues was where you went to get laid by the anorexic F.A.G.G. Metal sperm dumpsters with pancake makeup, hair teased to the moon, and boobs sticking out like rockets. How could a growing boy resist all that? “What do you think? You wanna try him out?”

“Have you heard him play?”

“Dudes.” Nigel made a cutting motion with his hand onto his lower back, “he’s got hair down to here!”

Mike was indeed all of that and a horrible guitar player to boot. After one try out, in which he couldn’t follow the most basic of progressions or even stay in tune, he was gone. And as Mike pulled out of the driveway never to return again, Nigel said. “I don’t know what happened, he looked so cool.” 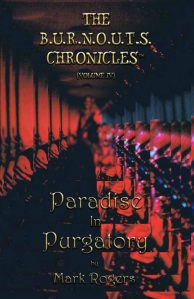