It was the last night of the season that anyone would hang at The Rock, and also the last time that many of these people would be together as a group at The Rock. December was rushing in its cold winds and, with most everyone having a car now, there was less of a need to assemble at this particular place anymore; at least during the winter months. While The B.U.R.N.O.U.T.S. were still under age to drink at bars, they could safely meet at any number of the parks in the Norford area and drink there. 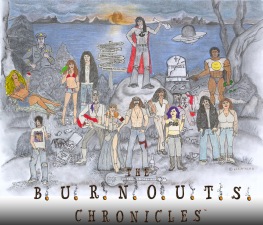 For those who went, The Rock had been a source of nirvana, an escape from everyday troubles, a place to call their own and to hide from the world; regardless of the fact that the world was sometimes less than fifteen-hundred feet away. And, except for the one time, no parents or cops ever came to The Rock and, except for an occasional canoe or kayaker….and Moon, there was never any other signs of humanity at The Rock. It was their safe zone, and would forever be remembered as a peaceful haven in their memories.

In Case You Were Too Stoned
(A Retrospective)

2 comments on “Rock of Ages”

This site uses Akismet to reduce spam. Learn how your comment data is processed.